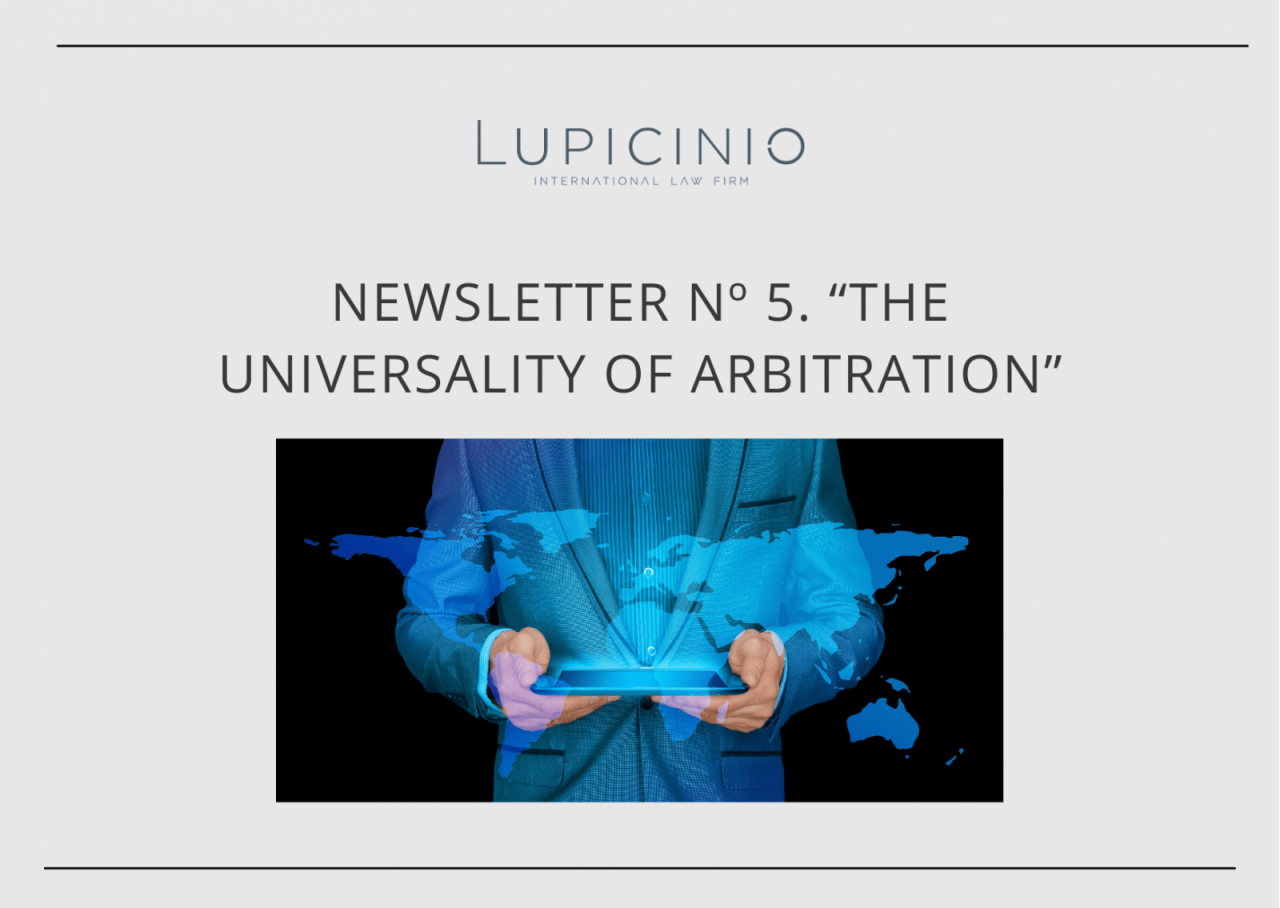 The Universality of Arbitration

I would like to add an important qualification to this ambitious title: “IN LIGHT OF A PAID-FOR NEWSLETTER”. In fact, I owe it to TDM/OGEMID, mentioned in my Newsletter No. 3, for having provided me with a free subscription for a few months, as part of its commercial policy. Fortunately, my positive experience will lead the Firm to subscribe, joining a long and prestigious list of institutions, both specialists and simple users like me, who now have access to what was initially a Forum, ‘Transnational Dispute Management’, and now continues to be an enriching Newsletter, ‘Oil-Gas-Energy-Mining Dispute Management’. This Newsletter was inaugurated in 2004 under the leadership of a Scottish professor, who died in 2008 at the age of 59, after an admirable professional career at the United Nations and at the University of Dundee. T. W. Walde was respected “as an adviser to governments and companies, as a mediator and arbitrator, as an academic researcher into the critical issues of the day, as an educator and through his leadership of the Centre for Energy, Petroleum and Mineral Law and Policy”.

A year after his death, another esteemed Harvard University professor, J. E. Alvarez, then president of the “American Society of International Law”, recalled Oscar Schachter’s pioneering 1977 work, “TheInvisible College of International Lawyers”. He went on to write “The Democratization of the Invisible College“, describing the changes experienced in the increasingly rich and thriving digital academic reality. Among the most interesting contributions in the world of the new Web 2.0 era, Alvarez mentioned ‘Opinio Iuris’, ‘International Law Girls’, ‘World Trade Law’ and ‘OGEMID’, expanding on the great results achieved by the latter.

I have been able to see, more than ten years later, that TMD/OGEMID, always interactive, -now owned by the MARIS publishing company in the Netherlands-  , continues to adapt to the needs of such a prestigious body of lawyers specialising in the international world of arbitration.

I will now summarise my findings from these past two months of careful reading. I will start by praising the joint initiative of TDM/OGEMID with the prestigious “Kluwer International Blog” on the occasion of the death of Martin Hunter, co-author with Redfern of the famous handbook “On International Arbitration”.  From their respective websites, they agreed to publish a touching obituary, “To our friend Martin”, signed by the 27 ‘research assistants’ -of, in total, thirteen different nationalities- whom the Professor had during his career, always linked to the famous “Vis Moot of Vienna” and which well reflects the universality of arbitration upon which I want to insist.

As we all know, this universality can be confirmed by the different cases that TDM/OGEMID has analysed during its time. Most of them have taken place before the CIADI, involving Venezuela, Mexico, Chile, El Salvador, Colombia, and also Spain, offering us a detailed summary of the ‘RWE v. Spain Case No. ARB/14/34’ prepared from London as part of the programme “International Arbitration Case Law”, but also before the ICC, against the Democratic Republic of Congo. In addition, TDM/OGEMID has provided news on some of the disputes being handled by the Permanent Court of Arbitration, such as the dispute between Ukraine and Russia over the detention of ships and the kidnapping of sailors, or the company ‘Resolute Forest Products’ against the Government of Canada.

With regard to Asia, I was able to read a solid commentary on the ruling of a Chinese court on the validity of an arbitration clause designating a non-existent “Hong Kong Arbitration Commission”. I could also learn from another Court’s ruling on whether, in full respect of the autonomy of will, it is possible to accept the existence of a “non-binding arbitration” within an “arbitration then litigation” formula, which gave rise to an interesting exchange of opinions between the aforementioned Court and other expert OGEMID subscribers. And finally, I learnt of the Supreme Court’s decision confirming that of the Hangzhou Court, which did not see that ‘foreign related elements’ could allow the parties to avoid the Chinese courts and resort to “international arbitration”.

I have been able to read summaries of papers published in full in the connected publication (free up until now) “Transnational Arbitration Observer” (TAO). Thus, I have read about the decision to annul by mutual agreement, according to ‘due process’ requirements, the proceedings initiated to better ensure maximum respect for Australia’s Foreign State Immunity rules in view of the enforcement of a ruling against India.

Diego Alonso Massa has been following, with particular interest, the complex issue of corruption in his recent contributions in TAO: ‘National Courts Will not always ´second guess’ Arbitral Tribunal Findings regarding Allegations of Corruption’, ‘How Allegations of Corruptions are handled Differently In and Outside the ICSID Regime’ and ‘Columbia fails to Satisfy ICSID Committee that Tribunal committed ‘Annullable Error’ in Excluding Alleged Evidence of Corruption’.

Turning to the new state of affairs in the Middle East, the entry into force of the Decree reforming and regulating the “Dubai International Arbitration Centre” (DIAC), merging the two previously existing Centres, DIFC and LCIA, as well as the Law extending the jurisdiction of the “Qatar Financial Centre Court” to the ‘Qatar Free Zones’ and the ‘Qatar Free Zones Authority’, has merited varied commentary.

Certainly, the situation of arbitration in the United States has figured prominently in the discussions among TDM/OGEMID subscribers. Some have continued to talk about the disagreements over the interpretation of Section 1782 and the awaited Supreme Court statements on the applicability or inapplicability of ‘discovery’ to international arbitration cases, where the various ‘Circuit Courts of Appeal’ disagree. Others speculate on how the Biden Administration may influence the existing relationship between the ‘Federal Arbitration Act’ and the ‘Federated States’, with clashes such as the one – ‘Case No. 20-1229 Robertson v. Intratek Computer’ – that has led to a specific Supreme Court order to the Solicitor General of the Department of Justice.

I have also learnt about the new model rules approved by the 66-member ‘North American Securities Administrators Association’ (NASAA) for non-payment of arbitration and related penalties.

Logically, the European Union continues to be a subject of debate in the digital world of arbitration for various reasons, an area of discussion in which this Newsletter on which we are commenting is greatly invested. Thus, I have read the constitutional approaches of Judge Butler of the Irish Supreme Court on CETA in Ireland, limited to the field of international law, where he is unable to generate internal effects in the member countries and also unable to integrate the CETA Courts into the Irish judicial system; references to the CJEU’s decision that arbitration courts be treated as ‘state actors’ in order to comply with the ‘state aid rules’, despite Luxembourg having denied them this status with regard to the possibility of raising ‘preliminary questions’; and Advocate General Bobek’s opinion on North Stream 2‘s claims regarding the desired arbitration provided for in the Energy Charter for signatories, including the European Union itself.

But it was the CJEU’s judgement of 2nd September that sparked the most fervent debate on the OGEMID website. The judgement text was circulated the same day, generating a series of opinions from different experts. This demonstrates the power of this virtual academic forum, capable of receiving, processing and presenting immediate reactions from all over the world on the decision made by Luxembourg on the three “preliminary rulings” raised in relation to the complex Komstroy v. Moldova case.

I would like to highlight a topic of growing interest in OGEMID, which relates to the increasingly important disputes on indigenous peoples and their rights. New Zealand has shown itself to be a greatly advanced nation in its recognition of this area of discussion, with firm statements on the matter by NZ Supreme Court. The Norwegian Supreme Court also published a ruling on the rights of the nomadic Sami people over grazing land for their livestock, violated by wind energy installations, known as ‘Fosen Vind’. This emerging reality will bring, according to Professor Ilias Bantekas, a new generation of contractual instruments aimed at regulating commercial developments with investors on land belonging to indigenous peoples.

The worldwide announcement (Paris, New York, St. Petersburg, Moscow, Vienna, Sydney, Naples, Texas, Basel, Miami, Taipei, Kuala Lumpur) of Courses and Seminars -some online and others hybrid- and their eventual subsequent Reports during these two months, has helped me become more aware of the universality of International Arbitration, which, for logical reasons, is far superior to the universality of other fields of Law, all of which are more specialised and less expansive.

Fortunately, and with this I will conclude, TDM/OGEMID also has access to issues related to Mediation, a subject that appears alongside Arbitration in the title of this Newsletter. I have therefore been able to learn about the new system of ‘OECD mediation settlement mechanisms’´, to promote cooperation between investors and local communities, and the ‘ways to strengthen the use of mediation’, agreed by UNCITRAL and ICSID, to promote this figure, in accordance with the ‘ICSD Annual Report’, which also highlights the agreements reached with the ‘Singapore International Mediation Centre’, with the ‘Energy Charter Secretariat’ and with the ‘British CEDR’. More on mediation in the next issue!