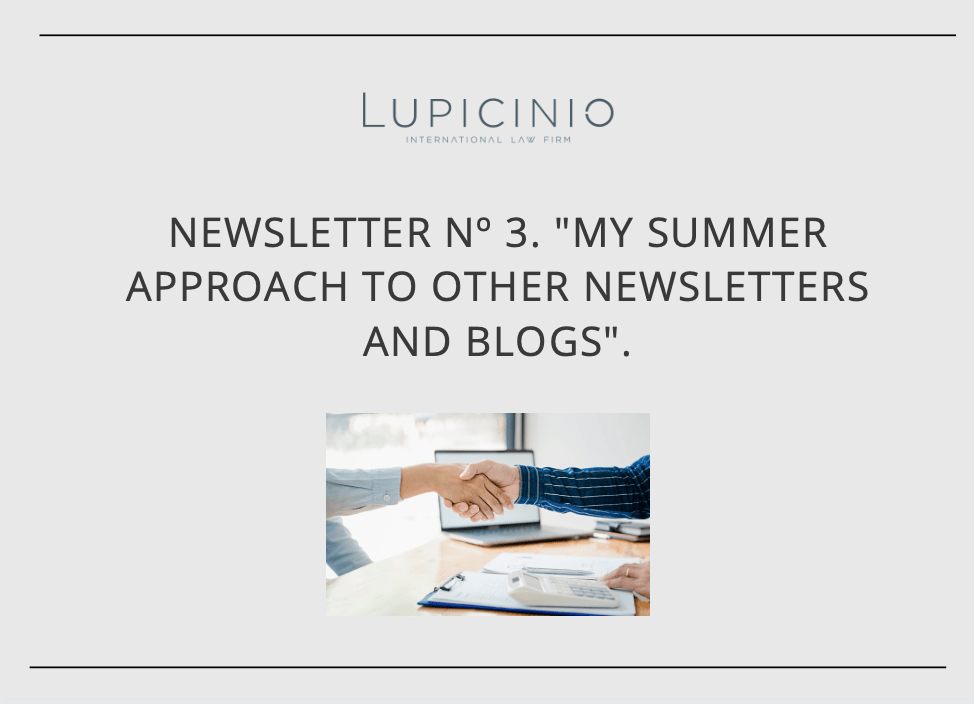 The summer enhances the usefulness of the Internet and offers great possibilities for long-delayed research. It is no longer necessary to travel with the books or manuals you want to discuss, as I did in my last Newsletter No. 2. One can use their personal computer to spend time exploring the web for news and updates in the academic, professional and journalistic world that deals with Mediation and Arbitration.

This is what I have enjoyed the past few weeks, researching and consulting personal Blogs and other more institutional Newsletters. I would now like to share what I have learned. I cannot do so without referring to the, for me unexpected and disappointing, existence of what I would call “digital junk” to use a terminology similar to that of “space junk”, one and other counterproductive derivatives of our own technological progress, which have not yet found a solution.

As far as Mediation is concerned, I have found valuable and surprising first-person Blogs, which reflect well the very cross-cutting nature of this challenge of bringing the parties together to reach the solution themselves, for which psychological, sociological and cultural knowledge and skills are particularly useful.  I have read and admired some that also have a strong literary charge reflected in evocative titles. For example, the one written, circulated and signed, together or separately, by Javier Alés and Elder Asael García, entitled “El Cofre de los Tesoros de la Mediación” (The Treasure Chest of Mediation) with entries such as ´Alicia en el País de lo Imposible´ (Alice in the Land of the Impossible), ´Pinocho. They put strings on you and made you look like a puppet´, or ´Mediation and the values of Sport´.

I have also read interesting contributions from institutions such as MEDIAICAM – where I am registered as mediator -, magazines “La Revista de Mediación”, “El Diario de Medición”, the Blog from “Escuela Internacional de Mediación”, plus reports from mediation associations such as ASEMED, AMM and ATYME, and, in what has to do with commercial mediation, CMEM, – in whose board I am a member.

In English, one also finds texts with a strong subjective content. I enjoy discovering what NYIAC Director Rehka Rangachari writes from New York in “Around Town: Upcoming events in International Arbitration”, as an introduction to the more than twenty pages that follow on the very rich programme she disseminates.

In short, carefully written texts, she addresses various aspects, often linguistic – explaining neologisms such as petrichor, astir – or linking terms such as limen or mores to the world of legal and social reality of alternative dispute resolution – messages that always end with an affectionate “I wish you safety and good health, dear friends“.

Fortunately, I have been able to recover part of the much collected, and until today unread by me, of the emblematic blog that the professor, lawyer, arbitrator and now, retired from ´Complutense University of Madrid´, also responsible for the ´Mediation Services at the Court of Arbitration CIMA´, José Carlos Fernández Rozas, has maintained for years, – its first issue back in 2016, and has already almost five million of visits from around twenty different countries -.  Although the blog covers five legal areas linked to his great professional activity, in what has to do with ´Commercial and Investments Arbitration´, I will mention his successive posts on how the ‘Tribunal Superior de Justicia de Madrid’ has been able to implement the resounding doctrine of the ‘Tribunal Constitucional’ with regard to the, always exceptional, possibility of annulling an arbitration award. Thus, the entry, – all around one thousand words -,  ´The High Court of Justice of Madrid rewrites a judgment of 1 October 2019 that had declared the nullity of an arbitration award, after admitting the Constitutional Court’s Judgment of 15 March 2021 an appeal for protection (STSJ Madrid CP 1ª 21 April 2021)´, the subsequent ´The examination of the contested award in accordance with the grounds indicated in the doctrine leads to rejecting the alleged violation of public order´, or the recent  Order of the ‘Audiencia Provincial de Oviedo’, First Section, of 5 April, which ´confirms the lack of jurisdiction, but adds that it is not a matter of submitting the disputed case to mediation but to arbitration´. The latter makes it clear that in Spain there is still a need to continue studying and teaching the resounding differences between two legal institutions that are totally different but increasingly linked in that they are both alternative methods to the ordinary courts.

I will also mention among my August findings valuable Newsletters from important Institutions, starting with the message ´The Sensation of Hope´ from the Stockholm Chamber of Commerce informing of the good momentum of the prestigious Arbitration Court after the first six months of 2021. In addition, the post by “American Arbitration Association. International Centre for Dispute Resolution” stating that ´ICDR rises to the Challenge, Having Held  10.000+ Virtual Hearing Since the Beginning of the Pandemic´; that of the “International Institute for Conflict Prevention”, ´backing a bid by CPR for the U.S. Supreme Court to resolve whether U.S. law allows federal courts to order discovery for private commercial arbitration abroad´; of the “International Chamber of Commerce”, ´announcing that its World Council has elected two new members to its 28-member Executive Board, Marienne Coutinho from Brazil and Ralph Mupta from South Africa´; that of the “International Centre for Settlement of Investment Disputes” reporting on their ´Two New Papers on Investment Mediation;  that of CIAR GLOBAL, on ´the recognition of an award in Chile of an arbitration administered in Germany´ or ´the next coming Arbitration Open, organized by Javier Íscar (AEDA)´; and finally, the Newsletters from the “Club Español de Arbitraje”, recalling the upcoming ´CEA Annual Congress in Madrid on 12/14 September´, and announcing the “CEA – 40”, webinar, ´Latam and Asia, how and why do these two worlds meet in arbitration´.

Although all the Newsletters mentioned here, and others from also powerful entities such as Delos Dispute Resolution, are freely accessible, it is worth remembering that some have their own, well justified, subscription policy, such as the highly valued Global Arbitration Review or OGEMID’s Transnational Dispute Management.

On the other hand, it is logical and understandable that large legal publishers, such as Wolters Kluwer, offer a huge amount and quality of information on developments and setbacks. From their arbitration blog, I would like to highlight three very interesting posts, ´Expansion of the Meaning of Public Policy: The Belarussian Approach´, ´The Emancipation of Arbitration: Recent Developments from the Supreme Court of Canada´, and ´Changing Paradigm of the Arbitrator´s Duty to remain Impartial in the Social Media Age´.

Turning to the big Anglo-Saxon law firms, I am a regular reader of what “Alvarez and Marshall” offers under the generic heading of ´Rising the Bar´, recalling from these past months the posts entitled ´Transaction Dispute: an Ounce of Prevention”, and ´Navigating the Discovery-Related Challenges and Opportunities of Modern Communication and Collaboration Platforms. From “Cleary Gottlieb” I will highlight his recent comment, ´In annulment Proceedings over ICC Award, Paris Court rules on nature of US, EU and UN Sanctions´. From “Allen & Overy” I found highly interesting its post ´Can Arbitrators rely in their own internet research in an award´.

I was also interested in the various information contained in the Swiss firm “Aceris Law”, on the “Beijing International Arbitration Center”, and the “Non-Enforcement in Singapore of an Arbitration Award Rendered in Favour of Non-Existent Company”

In the case of the large Spanish law firms, I have consulted the usual Newsletters, under varied formats, of “Garrigues”, “Cuatrecasas”, “Pérez Llorca”, “Broseta”, “Gómez-Acebo & Pombo”, “Uria”, “Roca Junyet”, etc. In the world of other smaller firms specializing in Mediation and Arbitration – small is beautiful – I would like to remember entries published by “Almoguera Legal”.

I realize that the reader will think that I have had a very monotonous summer, and to avoid that interpretation I choose to stop here, and go on to comment on the ideal complement that has accompanied me, the book “De U.N.O en U.N.O. Memorias de más de cincuenta años de diplomático” by an exceptional personality, José Sebastián de Erice, a name very present in the Career through several generations. In many moments of his successful professional career, from 1923 to 1973, I have seen how he exercised and developed his great qualities as a negotiator, mediator, expert, conciliator and arbitrator, which has made me very happy, reflecting the fact that Diplomacy and ADR respond to the same purposes of resolving conflicts and avoiding other instances, national or international.

Already in his early days, our protagonist had to deal with a ´Treaty of Friendship, Conciliation and Arbitration´ between Spain and Luxembourg. Later on, he had to intervene in a conflict between Spain and Portugal over the “appellation of origin Port Wine”, or help to overcome, as Dean, the accreditation clashes between De Gaulle’s Consul and Pétain’s Consul. He chaired, with the obligations that this entailed, more than twenty international congresses or conferences on such topics as ‘diplomatic’ and ‘consular’, and their corresponding privileges and immunities, and other more technical ones such as ‘copyright’. He also took part in the tough negotiations that would lead to Spain’s entry into the United Nations, and for this and other similar successes before different international bodies, he earned the honorable title of ‘great elector’. At a time when the economy and trade were well coordinated through diplomacy, as Ambassador in Bonn, he managed, together with important Madrid Ministers, to obtain the favorable concession of a gigantic public and private loan, which would allow the great challenge of the Tagus-Segura water transfer to be taken on and completed. All of this is certainly an example for those of us who continue to believe in the closeness between the qualities of a good arbitrator and/or mediator and those of a good consul and/or ambassador.