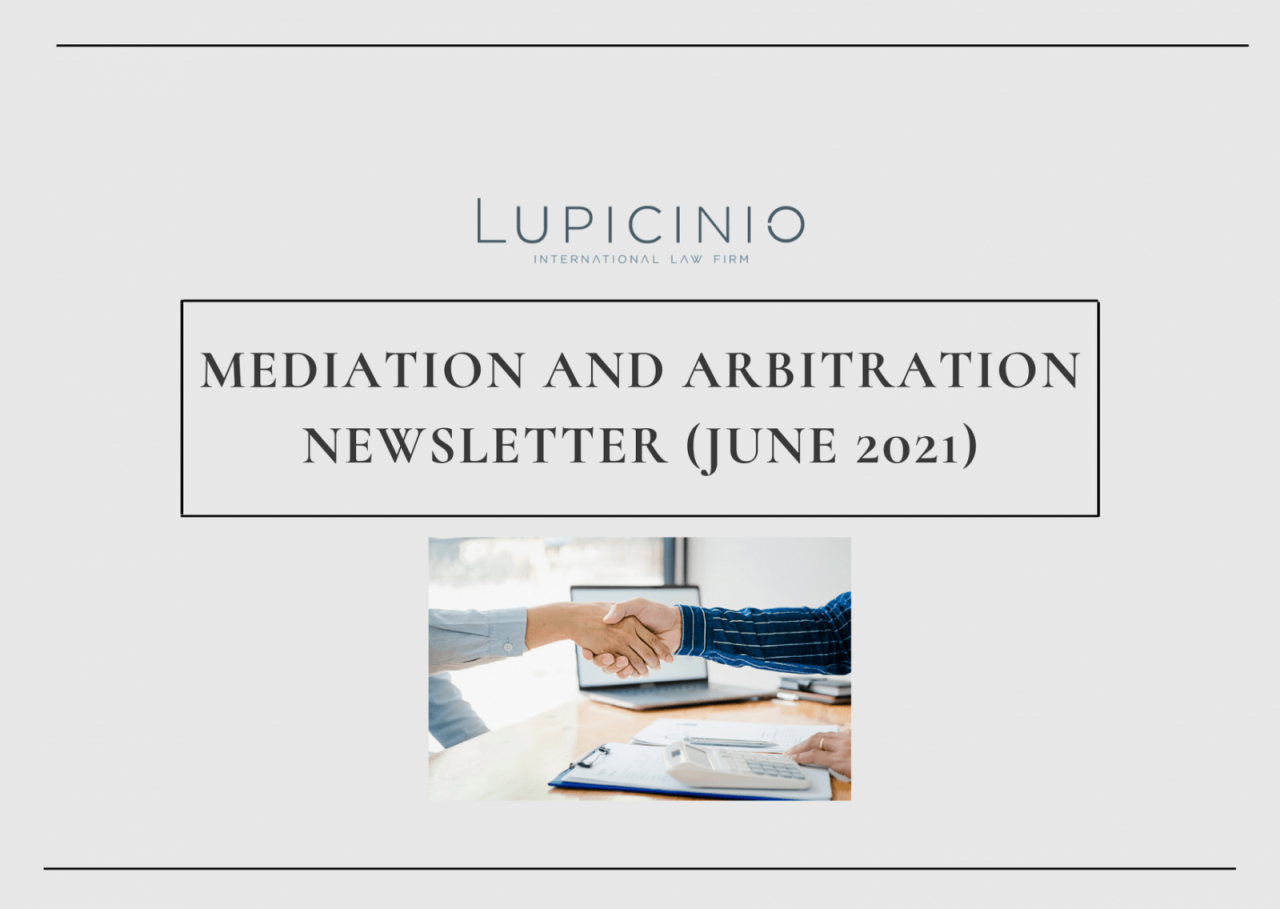 In the words of the author, Javier Jiménez-Ugarte: “LUPICINIO INTERNATIONAL LAW FIRM” will proceed to circulate, on a monthly basis, a new Newsletter dedicated to “Alternative Dispute Resolution Methods”, ADR in the old Spanish terminology, learnt, in my case, after reading Paulino Fajardo’s doctoral thesis on Mediation, and ADR in the English acronym. These also include Arbitration. This seems to us to be correct despite the reservations of many, who highlight the difference between a ‘self-compositive’ method in which the parties seek agreement, and a ‘heterocompositive’ one in which a third party is entrusted to find and impose the solution. In any case, they are specific methods, which respond to the sacrosanct principle of the ‘autonomy of the will’, clearly differentiated from the Administration of Justice, which is assumed by judges and courts.

It is obvious that these days the winds are increasingly favourable for these alternative routes, and this leads us to this new challenge, aware that other prestigious law firms, as well as different institutions, both public and private, national and international, have been generating and transmitting, with varying frequency, very useful information and comments, in similar formats, which will always be inspiring for us.

The Minister of Justice, Juan Carlos Campo, in his parliamentary appearance on 19 May, referring to the new “Preliminary Draft Law on Procedural Efficiency of the Public Justice Service”, (ALMEP), declared that “its axis is the procedural adaptation of the appropriate means of dispute resolution. I recognise that we are already somewhat behind schedule. I say this with humility and acknowledgement. The reporting and public hearing process has been longer than we thought, and we have been slow to evaluate and discriminate all those good contributions, but we have now sent the text definitively to the Council of State for the last step before it goes to the House. I hope it will be there soon.

The objective of strengthening Mediation, regulated until now by Law 6/2012, was already assumed by the last Government of Mariano Rajoy, which approved on 16-1-2019, a “Draft Bill to Promote Mediation”, prepared by the Minister Rafael Catalá and the Technical Secretary General, José Amerigo. Despite the dissolution of Parliament and the arrival of the new Government, chaired by Pedro Sánchez, the viability of this text was maintained throughout the term of office of Minister Dolores Delgado. It is true that, although it had received the general agreement of all parties, there was still controversy over the character that should be given to Mediation. That of “mitigated obligation” generated criticism, either by excess or by defect, from opposing positions.

The new Minister of Justice decided to launch another text, which was called “Preliminary Draft Law on Procedural and Technological Measures and Implementation of Means of Dispute Settlement”, approved on 16-12-2019, and submitted for public consultation the following June.

However, and as a result of new reflections, proposals and opinions, the new text, more complex than the previous one, was approved by the Council of Ministers on 15-12-2020, under the ambitious title of “Preliminary Draft Law on Procedural Efficiency Measures for the Public Justice Service”.

In its official publication, it runs to 163 pages. On page 2 of its long “Explanatory Memorandum”, it is already stated that “Title I of the Law contains a large block of reforms, specifically with regard to the insertion in our legal system, alongside the jurisdiction itself, of other suitable means of dispute resolution, as a measure which, beyond the initial slowdown and foreseeable subsequent increase in litigiousness as a consequence of the pandemic and declaration of the state of alarm, is considered essential for the consolidation of a sustainable public service of Justice”. In its analysis of the “Appropriate means of dispute resolution”, in addition to ‘mediation‘ – which becomes a ‘procedural requirement’ -, mentioned throughout the text are ‘conciliation’, ‘private conciliation’, ‘the neutral opinion of an independent expert’, ‘the confidential binding offer‘ and, finally, ‘any other type of negotiating activity’.

We are therefore faced with an authentic Law of Laws, as the lawyer, arbitrator and mediator, Blas Piñar[1], wrote. In any case, we must hope that the future ALMEP, which will finally be approved by the Council of Ministers for subsequent referral to Parliament, achieves the same success as the also ambitious French Law No. 2016-1547, “de modernisation de la justice du XXI siècle”, inspired, in my opinion, by similar principles, as can be deduced from the names of the various “Titres”, “Rapprocher la Justice du citoyen”, “Favoriser les modes alternatifs de règlement des differends”, and “Amélioration de l’Organisation et du Foctionnement du Service Public de la Justice”, which succeeded in demonstrating that “the best is not always the enemy of the good”.

These past few months have also been very positive for arbitration. The Judgment of the Constitutional Court of 15 February 2021 confirmed and enriched the doctrine of the High Court on Arbitration, already contained in its previous Judgment of 15 June 2020, with Judge María Luis Balaguer as rapporteur of both judgments.

As I write in issue no. 7 of the journal “La Ley. Mediación y Arbitraje”, directed by Professor José Carlos Fernández Rozas, “The awaited pronouncement once again satisfied the logical expectations of the defenders of Arbitration in the face of a growing interference, from the Civil and Criminal Chamber of the TSJ of Madrid, in the substance of the awards, which ended in diverse and unexpected annulments”.

It was a great event. I remember the numerous telematic forums that I was able to follow during the weeks following its publication, which commented on, and certainly praised, the aforementioned Ruling, organised by the “Little Open” of ‘IscarAbitraje’, by the “ICAM Court of Arbitration”, by the “CIMA Court“, by the “ICAM Sections of Corporate Law and Corporate Governance, and ADR”, and by the “Madrid Notarial Association” itself.

Such was the impact of this issue that the publisher, with the sponsorship of CIMA and its usual publishing house, Wolters Kluwer, has published an attractive book entitled “The arbitration process in Spain in the light of the doctrine of the Constitutional Court”, which I highly recommend.

Finally, and complying with the orders of the TC, the TSJM has agreed on the 21st of May the new Judgment dismissing the annulment action, previously upheld, against the ‘equity arbitration award’ of Rafael Jiménez de Parga, ordering the dissolution of “Mazacruz SL”. The Magistrate, Jesús María Santos Vijande, the main loser in this exciting legal battle, for his interpretation, – ‘overflowing’ in the words of the TC -, of ‘Public Order’, and for inadequately entering into other substantive issues such as ‘motivation‘ and ‘assessment of evidence’, and not only of form, as required by our Arbitration Law 60/2003 – inspired, like almost all, by the UNCITRAL Model Law -, has issued, as was to be expected, a dissenting and lengthy ‘dissenting vote’.

Madrid has thus regained greater ‘legal certainty’ in favour of its awards, which must have made the ‘Madrid International Arbitration Centre’ very happy. The CIAM, created on 18 December 2019, and chaired by José Antonio Caínzos, has since taken on the ‘arbitrations of an international nature’ that are brought before the main Courts domiciled here, thus enhancing the many attractions of our capital, duly set out in the “Report of the CEA to promote Spain as a seat of International Arbitration”.

I will conclude by highlighting that the two judgments mentioned above have been confirmed by the TC in two new rulings, dated 15-3-2021, on appeals for constitutional protection – in which other experienced judges, such as Xiol Ríus and Pedro García-Trevijano, were rapporteurs -, against annulments by the TSJM of awards – one in equity and the other by the ICC – on SWAPs, in relation to what the arbitrator Santiago Martínez Lage called “El sedicente orden público económico en la Jurisprudencia del Tribunal Superior de Justicia de Madrid“, [2]something which has perhaps now been definitively clarified.

previous
INFRINGEMENT OF THE PRINCIPLE OF AIRSPACE SOVEREIGNTY AND INTERNATIONAL CONVENTIONS. INTERNATIONAL SANCTIONS AND CONSEQUENCES
next
ALERT - REGULATION REGARDING THE DEBTS OF CUBAN COMPANIES ABROAD