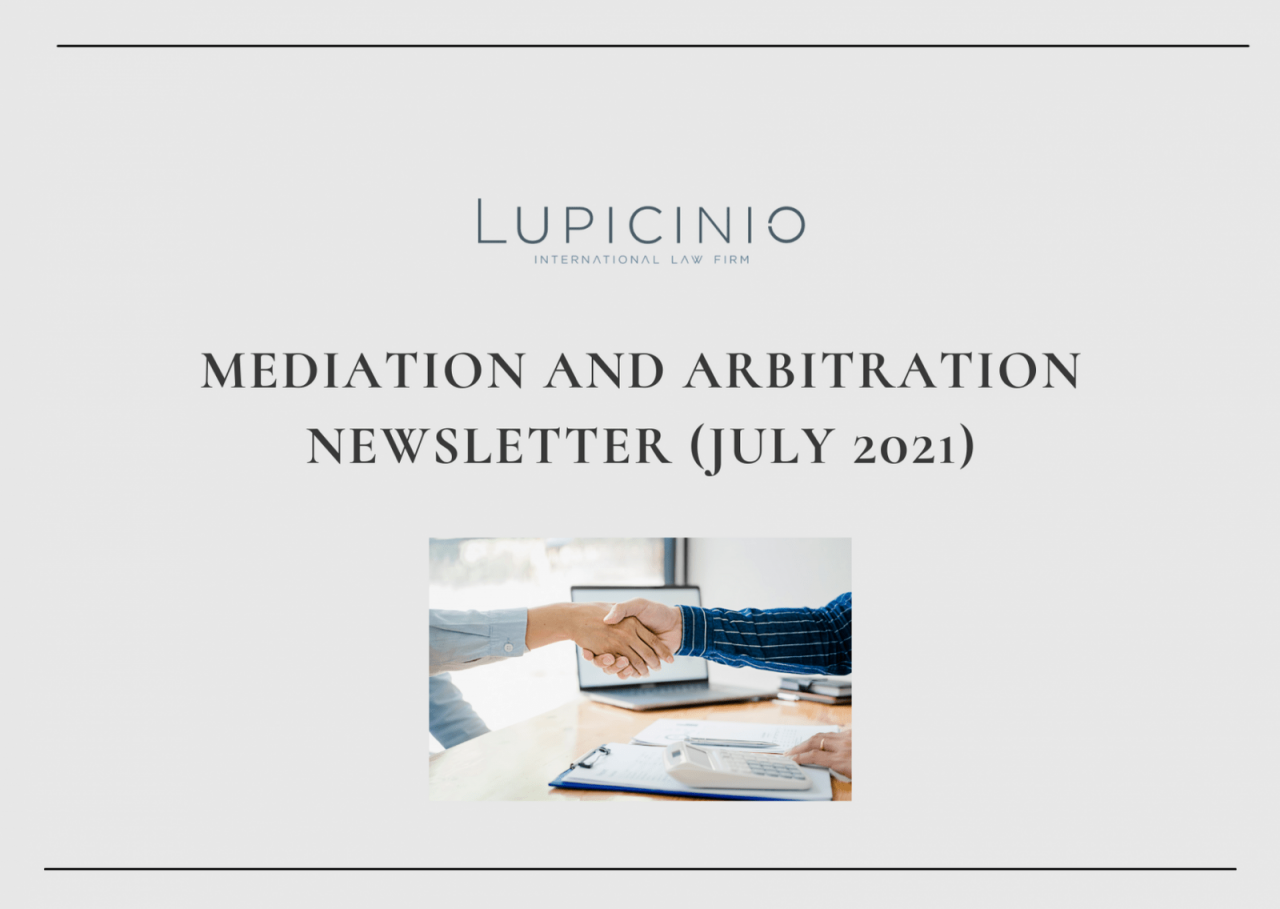 Today, I would like to speak about Traditional Academic books. For centuries, they have been the best way to accede to others´ knowledge and doctrines.

We have all experienced great personal pleasure reading them, and for those over the age of seventy, like myself, recognize that we miss such habit, without denying the many advantages of modern techniques which forced us to enter the new legal digitalized world, such as more information at hand, direct access, powerful searching methods, easy storage and full availability and interaction without big expenditure.

In any case, I would like to dedicate this month´s comments to two very exceptional books I have had the great pleasure of enjoying over the past weeks, analysing their many respective pages, to better understand their teaching and valuable conclusions.

The first book on Mediation, “International and Comparative Mediation. Legal Perspectives”, written by Nadja Alexander, edited by ´Wolters Kluwer´, and printed in October, 2009, and the second on Arbitration, “40 under 40. International Arbitration”, edited by Carlos González-Bueno, and printed by “Dyckinson” in Spain, 2021. I had access to the first one thanks to ´Stampa Abogados´ specialised private library, and to the second thanks to a generous present by its editor. Both books can be accessed online.

The work by Najda Alexander corresponds to Volume 4 of project carried out by multiple authors under the general title, “Global Trends in Dispute Resolution”, aimed at ´presenting current developments in various geographical regions around the world and in relation to diverse transnational practice areas. It can be cited as DTDR4´.

Nadja Alexander is a Professor of Law at ´City University Hong Kong´, Adjunct Professor of Law at ´Murdoch University´ in Australia and Honorary Research Fellow at ´University of the Witwatersrand’ in South Africa. A multi award winning teacher, she has extensive experience as a mediation practitioner, trainer, author and consultant all over the world.

I have to recognise the huge impression her 345 page book had on me.  It goes far beyond my years of study on the subject, and opened my interest towards new areas of knowledge. Nadja Alexander writes in the Preface, ´Mediation has become an integral component of many international law reform projects designed to assist transitional democracies and fragile states develop the knowhow and systems to manage their disputes more effectively and thereby contribute towards economic and political stability´, an ambitious expression for the many aspects she managed to face fifteen years ago, but still a hundred per cent valid.

Before expressing her gratitude to the dozens of experts from different countries to whom she is indebted, she explains that ´this book has focussed its attention on three cross-border legal instruments and six national jurisdictions, – three countries from the common law tradition (Australia, England and the United States), and three from the civil law tradition (Austria, France and Germany). However, examples from other countries are also found throughout the book´.

It would be impossible to try to summarise here its many merits, but, thanks to its exhaustive ´Table of Contents´, I will pick up best achievements.

Under its general title, it opens with a well-designed conceptual approach to definitions and basic terms, together with clear distinctions from other dispute resolutions processes, and specific references to Arbitration.

Two extra Chapters contain strong comments on ´UNCITRAL and International Mediation´ and on ´The UNCITRAL Model Law on International Conciliation´.

The book ends with three Appendixes, – ´Model clauses and Agreements´, ´Comparative Table of International Mediation Rules´ and ´Comparative Table of Laws based on the UNCITRAL Model Law´, whose excellent results prove the first-class research team which has accompanied the author in her efforts.

They have also devoted long time and efforts to include almost five hundred Footnotes.

We cannot avoid some final words regretting that Spain is not among the six countries taken into direct consideration in this superb book. Yet, I understand that our involvement in Mediation, theory and practice, is very much behind in comparison with the chosen countries. Unfortunately, Mediation continues to be  very much  an Anglo-Saxon dominated area.

In any case, this unique work could help all of us, including final deciders, such as Government and Parliament, to speed proceedings for an urgent approval of the Draft Law under the title “Efficiency Procedural Measures for the Public Service of Justice”, which also aims at a generalised use of Mediation and other ´adequate methods for settling conflicts´, (ADR), as commented in the last June Newsletter.

The second book I want to talk about is in fact two books, the first published in 2018, and the second in 2021, both under the same title, “40 Under 40. International Arbitration”

To better understand the Editor´s challenge, I would like to quote the 2018 Foreword, written by Alexis Mourre, then President of the “International Court of Arbitration”, ´the importance of this book can hardly be overstated. 40 bright and experienced practitioners, below 40 years of age, coming from all continents, almost half of them women, is an almost perfect image of the arbitration world of tomorrow´.

´Under 40´ has become iconic in the current arbitration world. One of the most successful Sections inside the well-known “Spanish Club of Arbitration” is so named, ´CEA_40´, and, together with another specific Section, ´CEA Women´, they have helped CEA to expand around the world with already thirty National Chapters.

As Alexis Mourre wrote in the mentioned text, ´achieving greater gender, generational and regional diversity is a fundamental condition for maintaining trust in arbitration as a global system of justice, and as a fair and legitimate means of resolving international business disputes´.

Mourre´s final words addressed to the Editor, ´my only wish is to see further editions of this remarkable book and to see more authors from Africa and Asia among its future authors´, have been duly fulfilled. After the three authors from Seoul, Singapore and Perth involved in the 2018 edition, experts from Abuja, Bogota, Quito and Lima are included in the 2021 compendium. If we check the 33 capitals where the 80 young practitioners work, we will see the more frequent seats are New York (18), London (11), Madrid (8) and Paris (8).

Now is a good moment to introduce to you the person behind this ambitious project. Carlos Gonzalez-Bueno was a Spanish State Lawyer with solid experience as a High Civil Servant through different political assignments in Patents & Trademarks, Industry, Energy, Science & Technology fields, and is now a well-known international arbitration practitioner and founding partner of the Law Firm which carries his name.

Myself, already very senior, out of my own short but intense personal experience, completely agree with his thought from 2018, included in the 2018 Editor´s Note, ´Age and experience should not be treated as synonyms. An under 40 lawyer is rightfully considered young, but she might be extremely experienced in the arbitration field. By way of example, all co-authors of this book are under 40 and still have a vast practice as counsel in the most demanding arbitral proceedings one can imagine´, a very objective and generous statement from a colleague who has already passed his fifties.

The 2018 and 2021 books are divided into different Chapters, six and ten respectively, adapted to permanent new needs and challenges. Trying to summarise them, well known Professor Gary B. Born, (I recently enjoyed the presentation at ULACIT, Costa Rica, of the 6th edition of his famous treaty “International Arbitration and Forum Selection, Agreements, Drafting and Enforcing” ), wrote in his 2021 Foreword: ´the book contains a number of articles examining the consequences of the COVID-19 pandemic for international arbitration. The book also includes contributions on topics that range from interim measures, emergency arbitrations, document production, data protection, artificial intelligence, arbitrator ethics, and challenges of awards´.

Evidently, I cannot comment on each of the 40 interesting articles form the 2021 edition, and I would be even more restricted if I were to include comments from the other 40 in the previous 2018 edition, as I would have liked. Taking into consideration gratitude references to J.M. Figaredo, for his help as co-editor, present in both Editor´s Notes, I will refer to his paper in the 2018 edition, under the title, “Cognitive Biases: what are they, do they affect arbitrators, and if so, can that influence be avoided?”, which I very much enjoyed reading.

The Editor told me that ´I consider that there are still so many good young arbitrators around the world that I am avoiding repeating authors in successive publications´.  I will so pick up from the 2021 another very original work by Blas Piñar, “Knocking on Disputes Resolutions Door: The ´Secretary-Mediator´ as a fresh new mediation window in international arbitration´, which adapts very much to the title of our Newsletter.

To conclude, I am including a final quotation from last Editor´s Note. Carlos González-Bueno writes that ´my intention is to continue this project and turn it into a collection that comes out every 3 or 4 years. While I will continue to actively seek talent in this fascinating field of law, I encourage anyone who would like to contribute to the third edition to start thinking about the subject of their research and to contact me´.